4 The Population Data and Interactive Map


I have an obsession with collecting population data for the year 1900/1901 & I've been collecting data since around 2011. It gives you a lot of insight into how the world was at the time. The further back in time you go the more difficult it is to find reliable comprehensive sources of populations data. 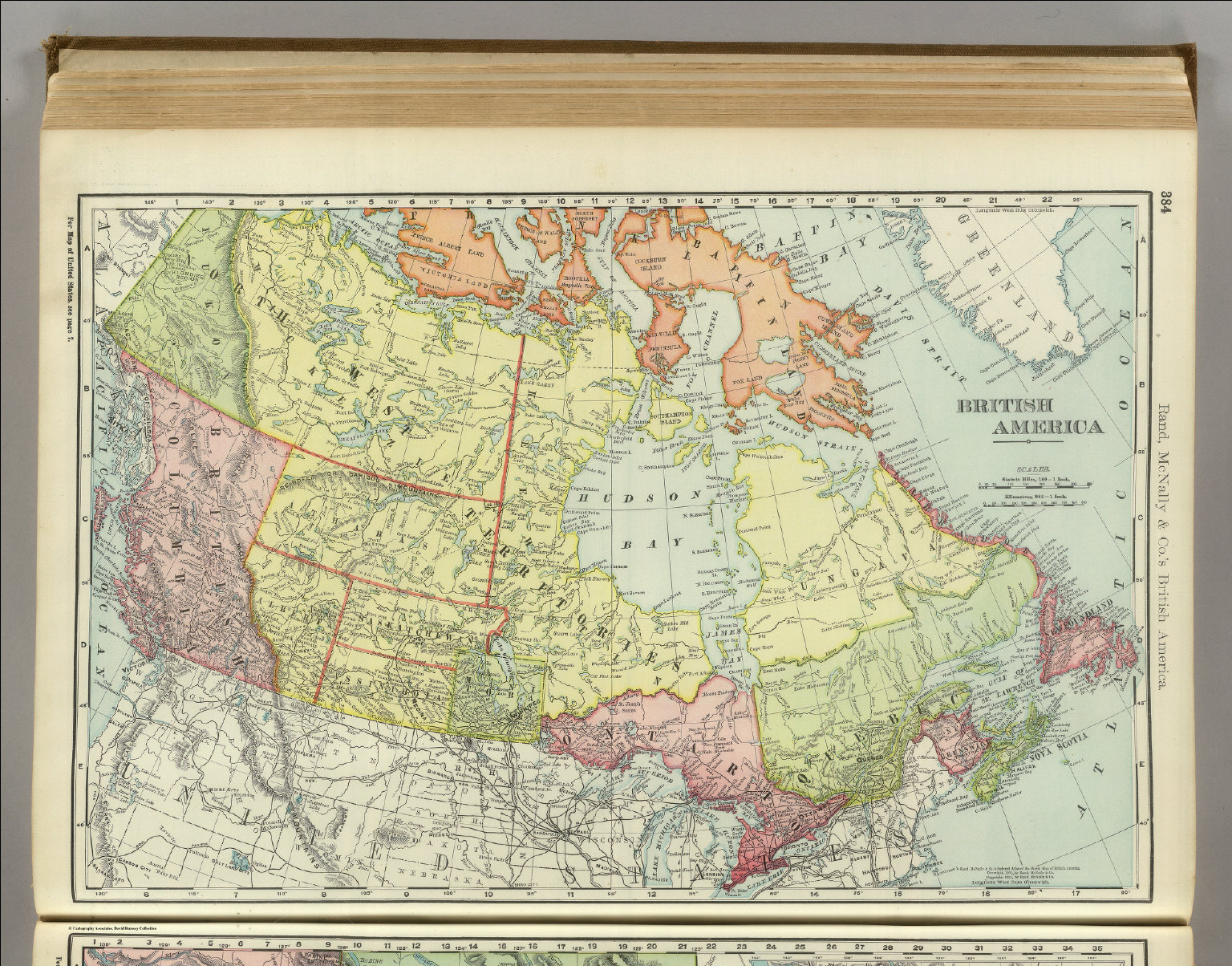 The map above shows the territorial divisions of the Dominion of Canada and the Colony of Newfoundland around the turn of the twentieth century.

My main interest in historic population data stems from the fact that you can use it to infer where infrastructure would have been built at a particular time in history. Buildings are created by humans, so where there are humans, there ought to have been buildings of some type (even is it's a tent, tipi, or a hut) built by them. 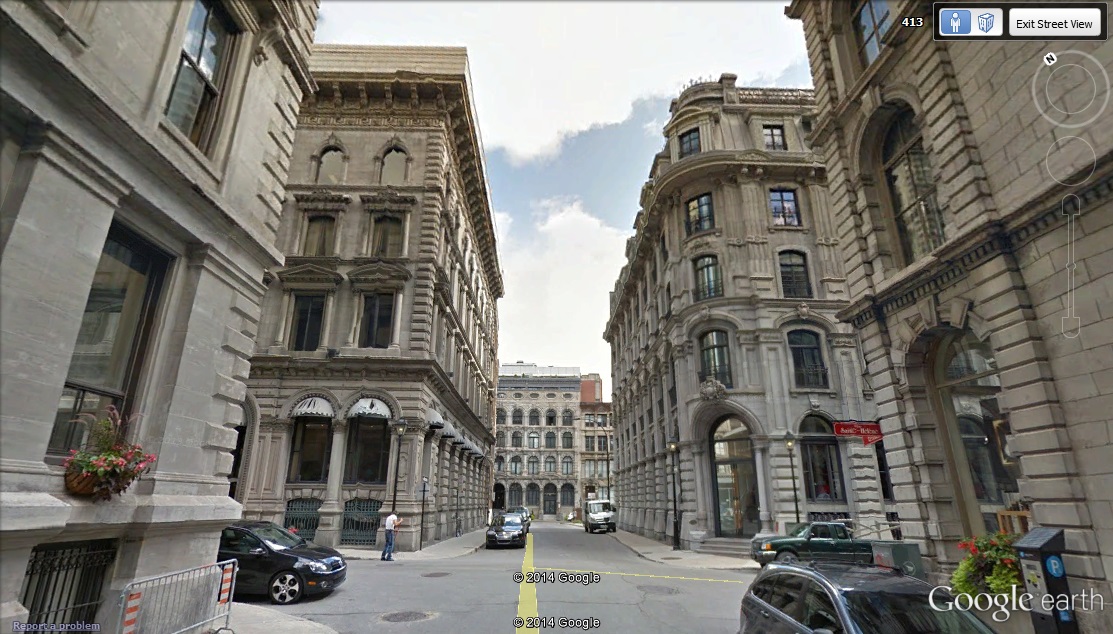 In 1901, Montreal was the most populated municipality in Canada. It isn't a surprise that it's also one of the most renowned cities in Canada for historic pre-1900 architecture. Image via: Google Street View.

To me, the years 1900/1901 were a pivotal time in history. It was when Queen Victoria died and King Edward VII ascended to the throne formally closing the Victorian era. It was when new technologies were coming out. Steel was being used to construct buildings of a height greater than six stories. Horseless carriages were beginning to be seen. Even technology for motion pictures was being developed. 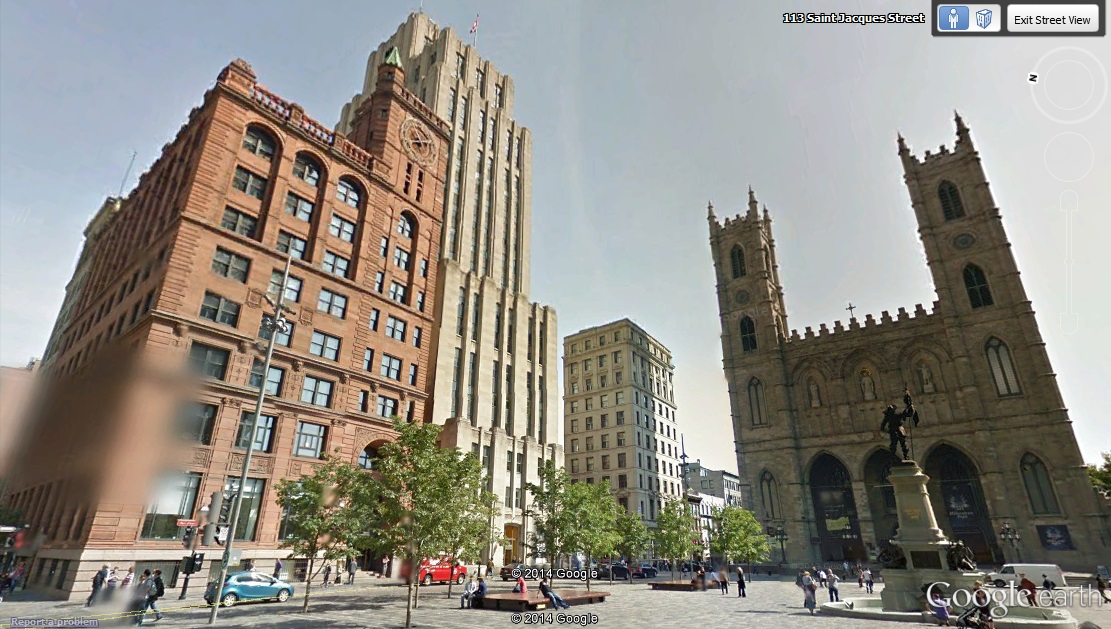 In the image above, the tall red stone building with a clock tower on the left is the New York Life Insurance Building in Montreal, Quebec. Erected between 1887-1889, it is considered to be Canada's first skyscraper. It incorporated new technologies using iron and steel to help support the structure.

Industry was also exploding. Things were becoming more and more massed produced. Soon assembly lines and systems of interchangeable parts would come into existence. Automobiles would become more common than horses on the streets. 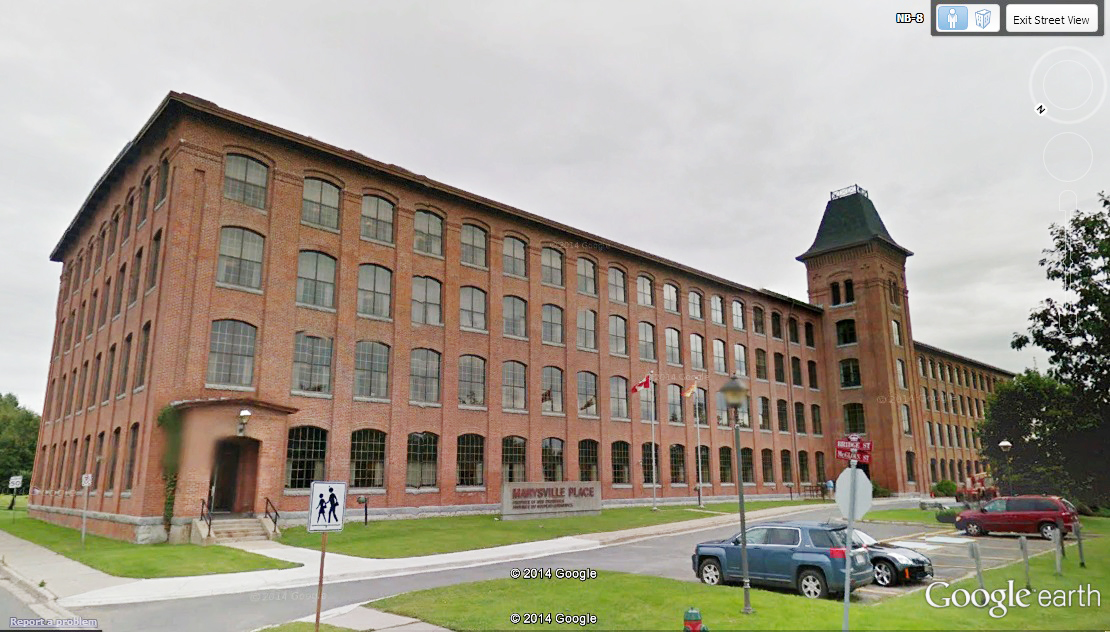 Marysville, which is now a part of Fredericton, is considered to be the best preserved 19th century mill town in Canada. It comes complete with still intact 19th century duplexes that are still used as residences. In the year 1901 the municipality was the 182nd most populated in all of Canada and the 27th in New Brunswick containing 1,892 inhabitants.

Through all of these technological innovations, by 1900/1901 Victorian society still had a delicate taste in architecture that would gradually be lost over subsequent years following the Victorian era. It's my desire to find and admire Victorian and Georgian era architecture of all types (as well as equivalent architecture in other parts of the world) and it is this that drives me to collect so much data regarding this time in history. 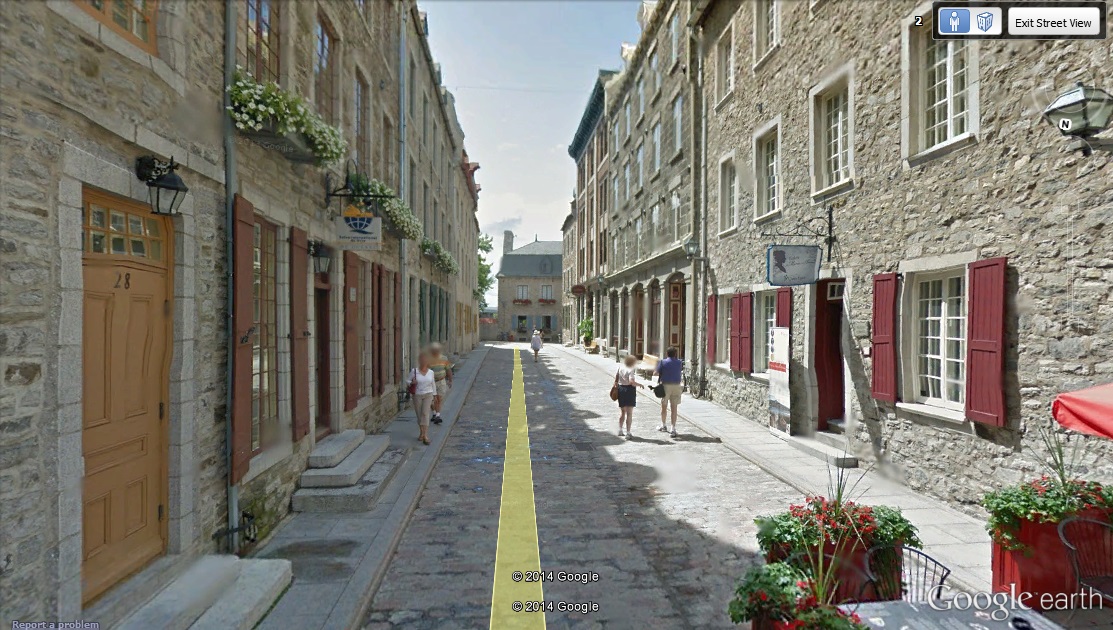 Quebec City is well known for its old architecture, dramatic location, fortifications, château, citadelle, French culture, and relatively long European history for North America, being founded in 1608 by Samuel de Champlain. It was the third most populated municipality in Canada and the second most in Quebec in the year 1901.

Even some of the least populated communities listed in this article can boast interesting pre-1901 architecture. Below are a couple of examples. 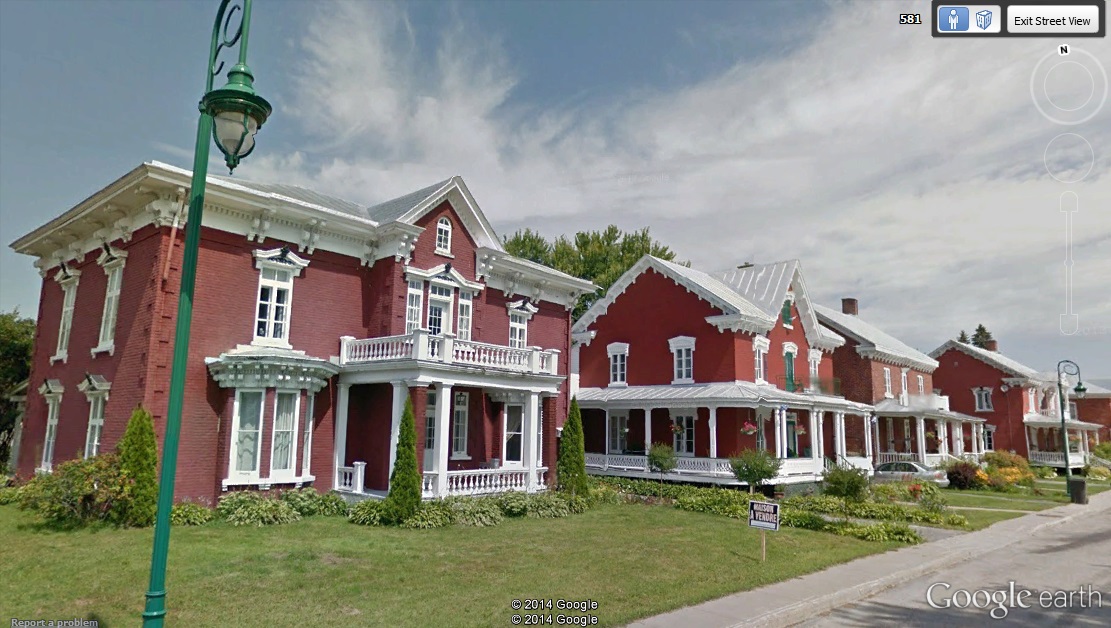 Above is the community of Yamachiche, Quebec. A village known for its Picturesque 19th century brick houses. It was the 337th most populated municipality in Canada and 94th in Quebec being the home of 1,100 inhabitants in the year 1901. Image via: Google Street View. 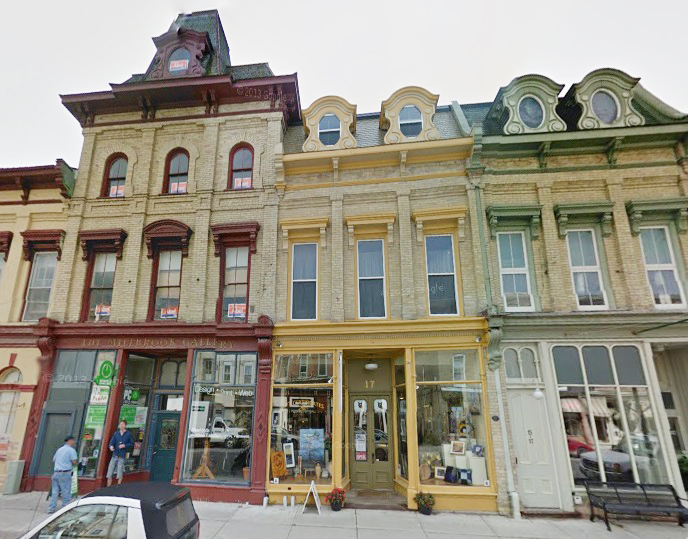 Above is Millbrook, Ontario. A village that only had 917 inhabitants in 1901 making it the 402nd most populated municipality in Canada. Image via: Google Street View.


Initially when collecting the data for this article I used data from Library and Archives Canada. (1901). 1901 Census. [10] through a website that summarized each census area by the number of lines per page. I was able to estimate (with great accuracy) the population of a municipality to the nearest 50. Since then I've revised and corroborated my data with Rand McNally & Co.'s Enlarged Business Atlas and Shippers' Guide. (1903). [9] where in their indices they indicated the populations of all of the municipalities in their atlas.

Rand McNally is an American company centred in Chicago and many of their place names for Quebec and New Brunswick were Anglicized making place identification difficult (since the names are typically in French by convention). This difficulty was compounded since many communities in Quebec have amalgamated or changed their names numerous times since 1901. I had to do a lot of research to track down the current names and locations of these municipalities. In section 4.5 I have an interactive Google map displaying every municipality found in this article.

I also referred to Dept. of the Interior, Canada. (1911). Population, 1911: Cities and towns with population upwards of 7,000. [8] published by the Canadian Department of the Interior which highlighted the population trends of municipalities that had more than 7,000 inhabitants in 1911 all the way back to the first census in 1871.

A number of municipalities especially in the Maritimes are more like "rural municipalities" that are highly decentralized. Many of them have also declined in population as well since fishing and farming have decreased. Many other communities all over Canada especially in British Columbia, the Maritimes, and Quebec were once mining centres that have nearly become ghost-towns. A number of rail-towns and ports have also declined.

The rate of incorporation for municipalities with populations lower than 2,000 appears to vary from region to region. For instance, in the Maritimes municipalities don't appear to have been formally incorporated unless they had a couple thousand inhabitants opposed to the threshold being around 1,000 for much of Ontario and Quebec. When it comes to Western Canada the threshold appears to be much lower though. All of this is what I've observed and I haven't found an official statement to confirm my observations.

Newfoundland's data is the hardest to come by since Newfoundland at the time wasn't part of the Canadian Confederation and didn't take censuses during the same years. It is likely largely underrepresented in this article especially for communities with less than 2,000 inhabitants. With many of my figures I've had to estimate the populations using data that was collected by businesses and churches around 1901. It's because of this that I exclude Newfoundland from the main population data and give it a subsection of its own.

Many of the county seats were identified by using maps published by Rand McNally, Cram, and the Dominion Publishing Company. For Quebec, the seats were identified by Appleton, D. & Co. (1891). Map of Quebec 50. [30]. Ontario's and some of Quebec's were also verified by the Dominion Publishing Company. (1899). The Canadian Dominion Survey, With Distances, A New Railway, Post-Office,Township and Precinct Map Of Ontario and Quebec. [31]. Manitoba's and British Columbia's were identified by using Cram, G. F. (1901). Cram's Standard American Railway System Atlas of the World.  [5].


In this section I outline what each column header and abbreviation means in section 4.


In section 4 are two tables. The first one displays every municipality in the Dominion of Canada with more than 500 inhabitants in the year 1901. The second one displays what data has been collected for the Colony of Newfoundland. The tables include the following headings which can be clicked on to sort ascending or descending:

Also, concerning the counties column there are two special cases. When it comes to the District of Algoma, since 1901 parts of it have broken off and formed the Districts of both Sudbury and Manitoulin. Due to this the numerical ordering is inconsistent for Algoma when sorting by counties. When it comes to the municipality of Bear River, it's split between the counties of Annapolis and Digby. Since each municipality is only listed once in the data, I've chosen to list it as being present under Annapolis' count of four municipalities and leave Digby as missing one of its four municipalities.

4 The Population Data and Interactive Map


In this section are two interactive tables and an interactive Google map. One table is for the Dominion of Canada and the other is for the Colony of Newfoundland. The tables have their own independent scroll bars on the bottom and on the right of their interface. You can use them to navigate from column to column and row to row.

The data for Canada and Newfoundland are displayed separately because Newfoundland's data is incomplete since the colony didn't take censuses during the same years as the Dominion of Canada and data is scarce.

Beneath the tables is the interactive Google map, close by to allow one to go back and forth easily. A gold star icon represents 100,000+ inhabitants, red star 10,000-100,000, diamond 5,000-10,000, square 2,500-5,000, circle 1,000-2,500, and pink circle 500-1,000. When you click on an icon it will display the municipality's population and rank for the year 1901. Since I've updated the data on this article since making the map the rank in the description of each icon is slightly inaccurate. So it's best to refer to the data in the article. Nevertheless, the rank still gives you a very good ballpark measurement. There's a full screen option on the map in the upper right of its interface, that version has a search bar that you can use to search for any of the municipalities.

A pie chart showing the distribution of population in what would become Canada today.


A pie chart showing the distribution of the municipalities listed in this article by province/territory.


Below is a series of maps illustrating the population density present in Canada in 1901 (published in 1906). The maps shown from top to bottom are as follows: The Maritime Provinces, Quebec & Ontario, Manitoba & Saskatchewan, and Alberta & British Columbia. 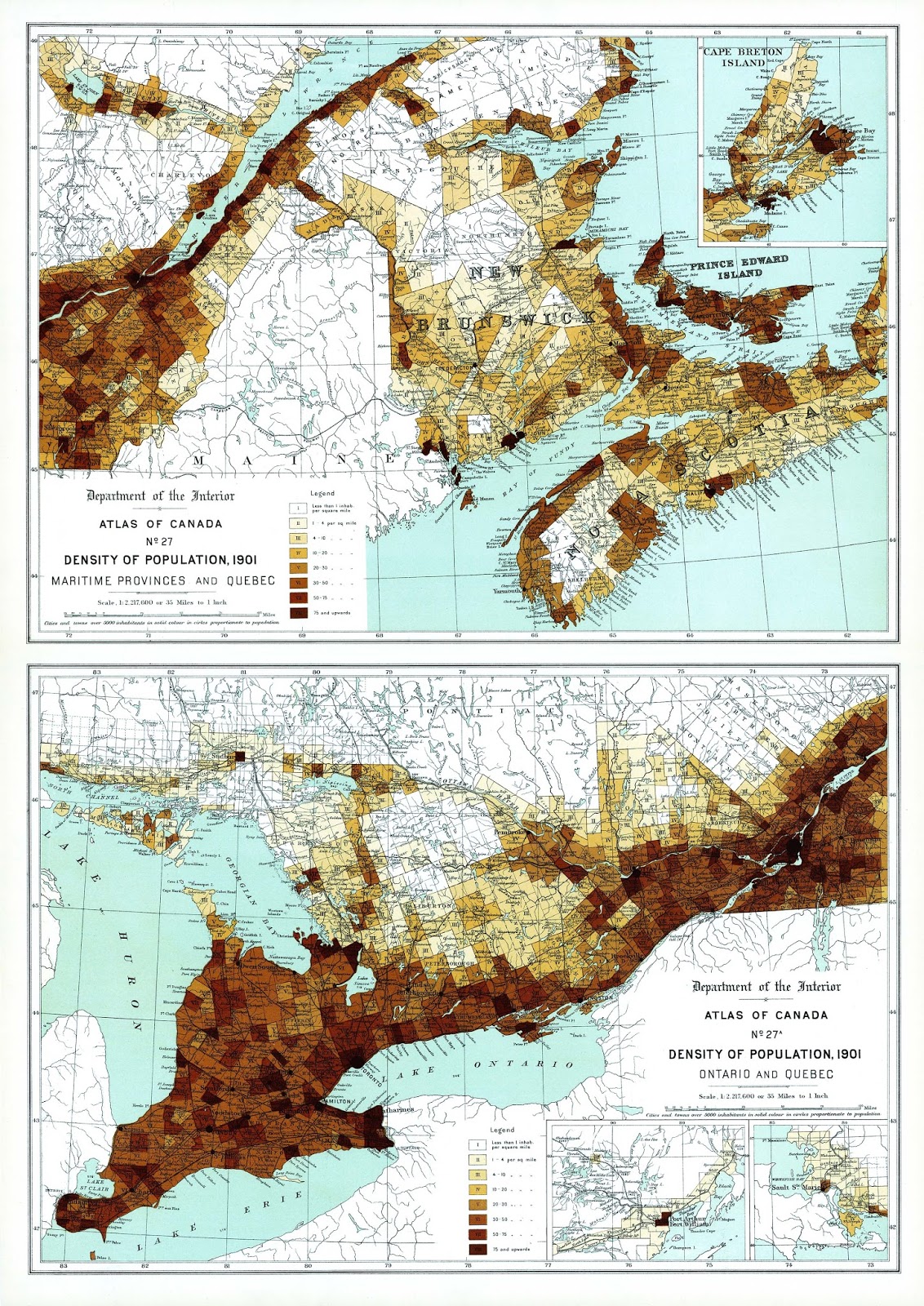 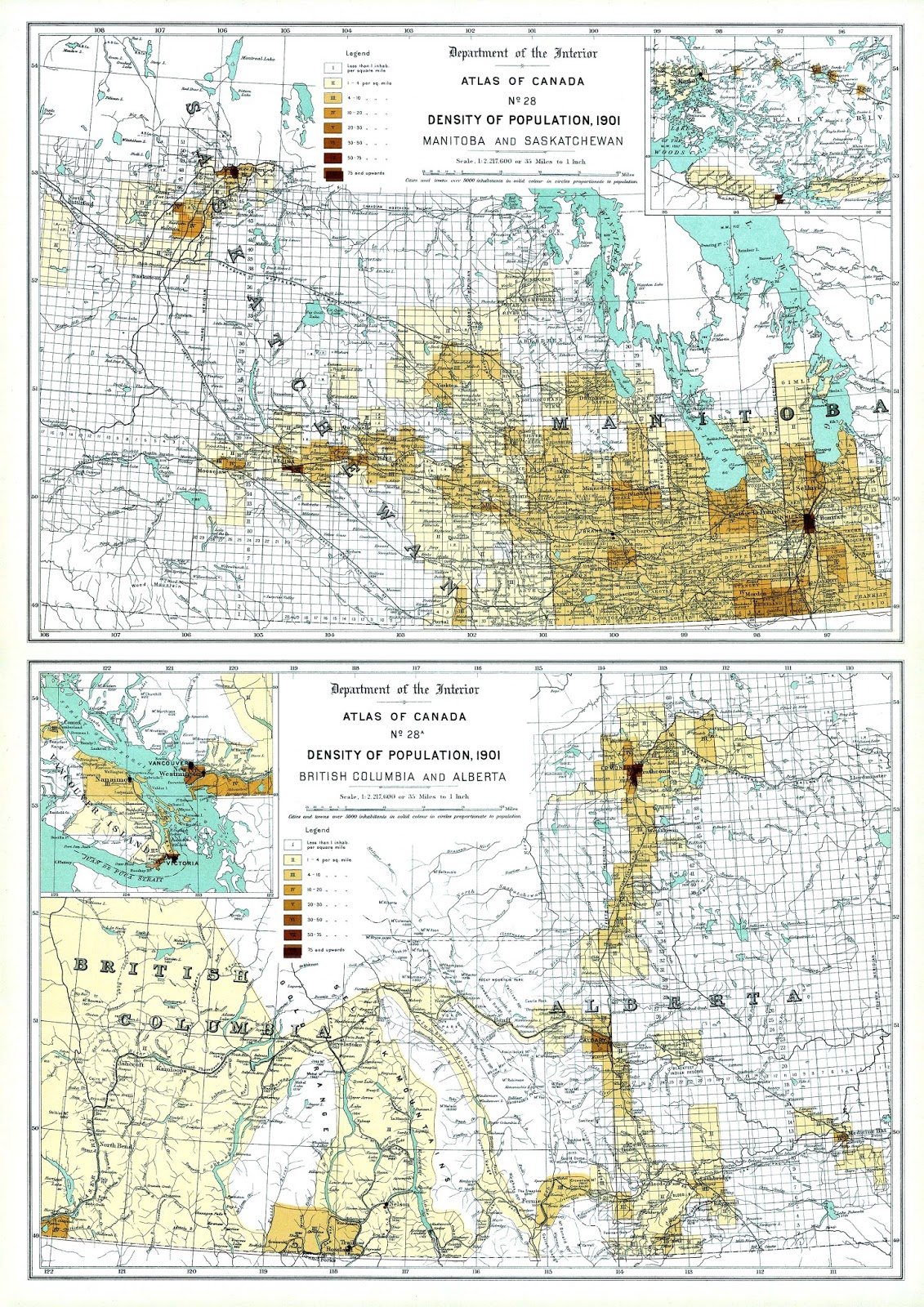 It's interesting to note the correlation between the maps above and the interactive Google map of the municipalities listed in this article in a section further down. This helps confirm the validity of the data collected in this article.


The chart below show the distribution of the municipalities by population. It only includes around the 187 most populated (1,827 and up) due to practical limitations.


The immense magnitude of the cities of Montreal and Toronto in relation to the other municipalities in the chart above is astonishing. 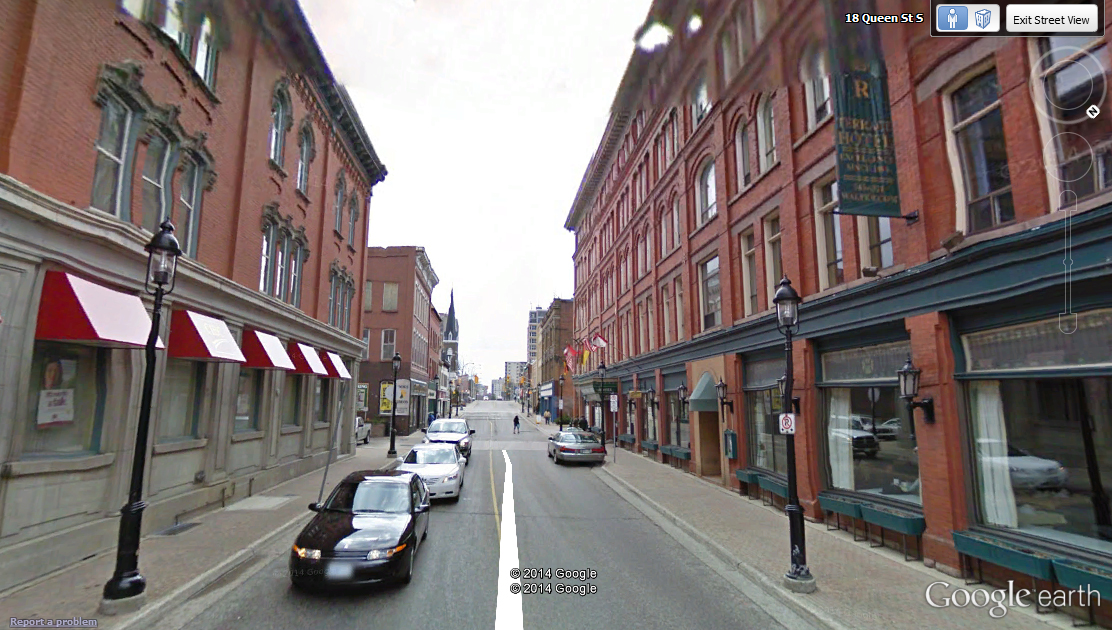 Berlin (Kitchener), Ontario, the 29th most populated in the Dominion of Canada in 1901 with 9,747 inhabitants can boast some pretty substantial Victorian constructions. To the right is the Walper Terrace Hotel, built in 1893. Explore on Google Street View. 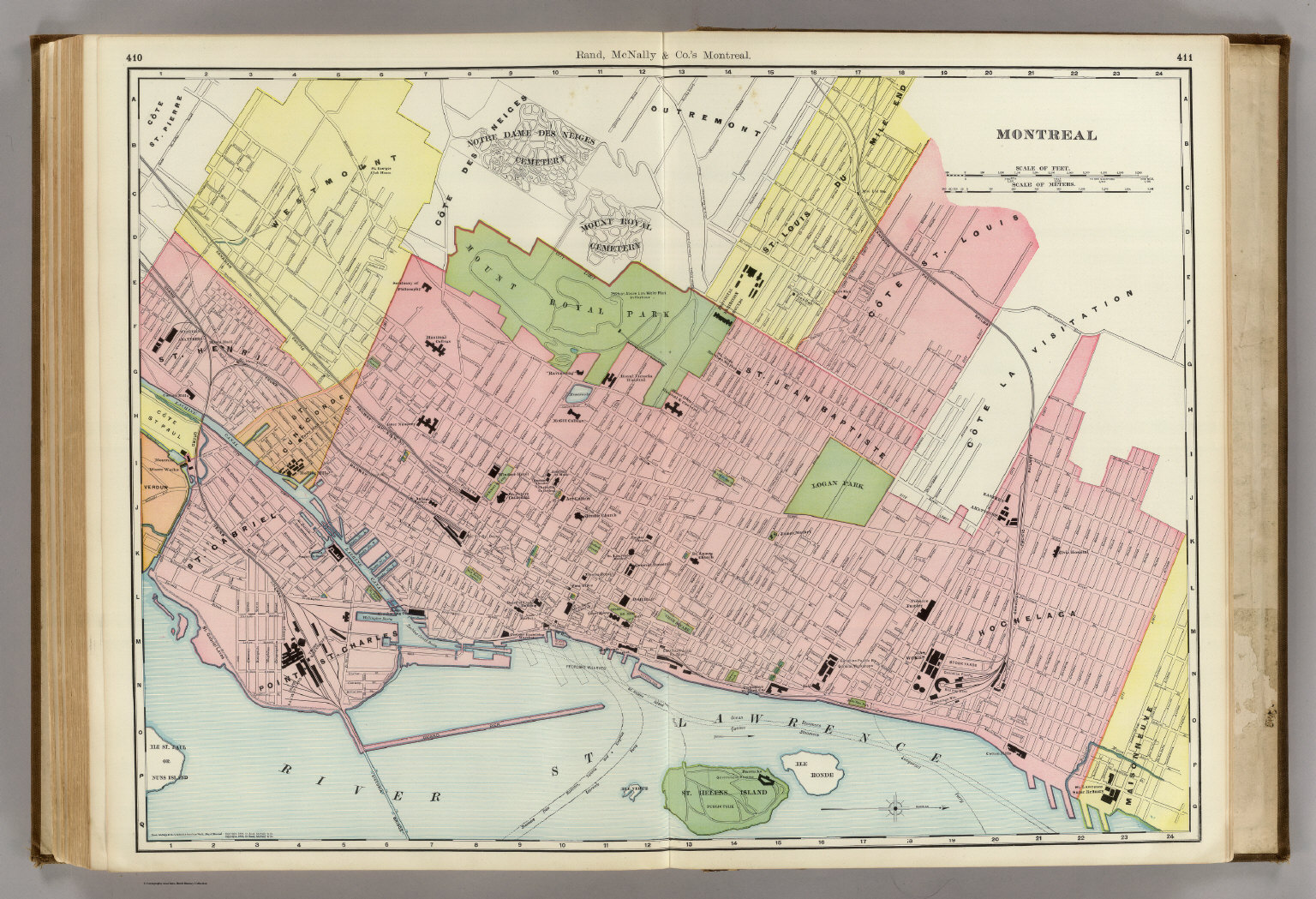 The map above shows the wards and communities that surrounded the city of Montreal around the turn of the twentieth century. The communities visible here that are listed in this article include: Côte-des-Neiges, Côte-Saint-Paul, Outremont, Maisonneuve, Sainte-Cunégonde, Saint-Henri, Saint-Louis-du-Mile-End, Verdun, and Westmount. Interestingly, Saint-Henri happened to be the twelfth most populated municipality in Canada in 1901.


The only rule that I know of is that to qualify as a city in British North America in the 1800's you had to have a population of at least 10,000 inhabitants.

A pie chart showing the distribution of the urban designations of "unincorporated', "village", "town", & "city". 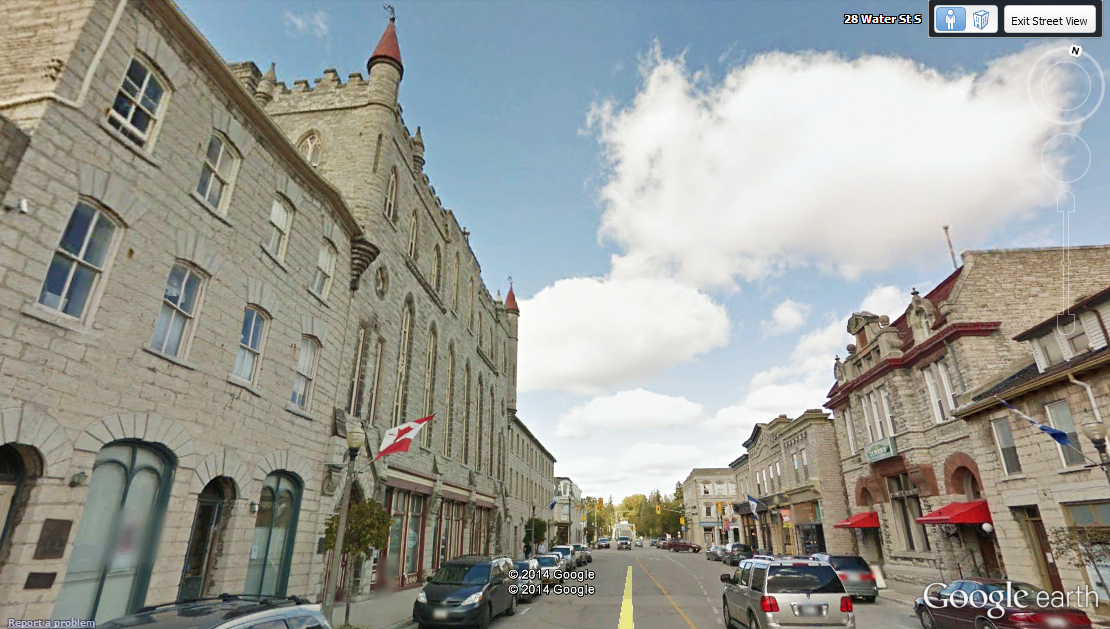 St. Marys, Ontario, the 97th most populated in Canada in 1901 with 3,384 inhabitants. It was incorporated as a town. It is also known as the "Stone Town". Explore on Google Street View.


For links to all of my related writings you can visit my Population Data and Architecture Articles page.


To keep things neat and manageable, I utilize one universal reference list for all of my population and architecture related articles: Reference List for Population Data and Architecture Articles.
Pin It
Posted by Billy Wilson at 23:24